Aurolab, based in southern part of India, is an integral part of the Aravind Eye Care System. It manufactures a wide range of high quality ophthalmic consumables such as intraocular lenses, surgical sutures, pharmaceutical products, surgical blades and equipments.

Though its primary focus is on ophthalmic segment, Aurolab is diversifying into related health care areas where its existing capabilities can be leveraged, such as cardiovasular sutures, microsurgical hand sutures, antiseptics and disinfectant solutions, spectacle cleaner etc.

Aurolab's growth and product development criteria are driven by societal needs for high quality products at affordable prices. All Aurolab products are manufactured on efficient production lines with strict quality assurance measures that comply with US FDA, EU GMP, WHO GMP norms. Aurolab's products are exported to 130 and more countries worldwide, with focus markets like India, Africa, Latin America, Central America and Southeast Asia. Aurolab envisages entering European and other developed markets on the strength of its product quality and as a strategic means to cross subsidized products in needy markets.

In the early 1990s, there was a great deal of debate about the relevance of Intra Ocular Lens (IOL) to developing countries. Though widely accepted as a better procedure, it was argued that developing countries should not go in for it as the IOLs were expensive. This presented an opportunity to Aravind. Taking on this challenge, in 1992, Aurolab was established as a non-profit charitable trust for manufacturing ophthalmic consumables. It started with the production of high quality IOLs and made them available to the developing countries at a small fraction of the price of imported IOLs.

In 1997, Aurolab established pharmaceuticals division by manufacturing unavailable and orphan drugs. It was first started with 5 ophthalmic drugs and later it was extended to 64 which include surgical adjunts, ophthalmic dyes and eye drops. Though there is a remarkable price reduction in the intraocular lens the cataract surgery fee still found to be higher due to the suture cost of the surgery.

So Aurolab identified an opportunity in manufacturing the sutures in 1998 and further with the improved technology it manufactures absorbable suture. 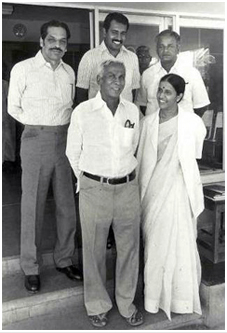 In 2005, Aurolab found a potential market in blades and started manufacturing blades with the in-house facility.Then it extended its market to equipments by making Green laser for diabetic retinopathy. More significantly the efforts of Aurolab have brought a positive impact in the ophthalmic industry as a whole, in bringing down the prices by producing the high quality of ophthalmic products.